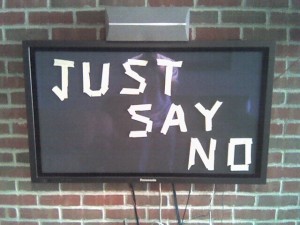 The Time magazine article, “A Successful Leader Has to Learn to Say No,” begins with a quote from former British Prime Minister, Tony Blair, “The art of leadership is saying no, not yes. It’s very easy to say yes.”

Why is Saying No an Art of leadership?

I have an idea. And this idea holds true whether a company is doing well or poorly.

Ideas are shared with leaders constantly. Leaders must determine which ideas to proceed with, and which ideas need to be discounted.

A leader must understand that saying no is a way to maintain laser focus on the vision and objectives at hand.

When a company is performing poorly, ideas are presented to set the ship straight again. How many of these ideas are wild chases? How many are just rearranging deck chairs? Leaders must cut through the chaff to determine what ideas are going to provide real solutions.

When a company is performing strongly, ideas of a different sort are presented to leaders. Perhaps they come as forms of company expansion or additional revenue streams. But which of these ideas enhance and fulfill the mission and the corporate objectives at hand?

Of course, it would be easier to say yes. Leaders do not want to be party to obstruction. But excellent leaders always have their eye on the prize. The greater the focus, oftentimes the more numerous others are told “no.” And the greater the communicator a leader is, the easier the “no” is accepted.

The Five Times Saying No is an Act of Leadership

Entrepreneur magazine published an interesting article about times when a leader must say no.

Sounds sensible, right? Too often the bad idea is mixed in with an attempt to honor ideas and those who put them forth. Treat the idea on its merits alone and move on.

See my explanation of when a company is performing well.

You are paid to provide guidance. Not all client ideas are the best course of action for their company. Even if they are paying you.

Some of the best ideas come from those who are closest to the client. But is an expanded offering a good idea? Does it fit with furthering quarterly, yearly objectives?

As a leader, you may be the last to interview a candidate who has received thumbs up from everyone who has already interviewed them. You may have a completely different take on a candidate when it comes to what you are looking for. It may be hard to say no, but it may be correct.

What do you think? Can you add an example of when it is time to say “no”?